WARNING: This film is for seasoned horror fans and I do not recommend casually watching this or popping it in for your Halloween pumpkin carving party. 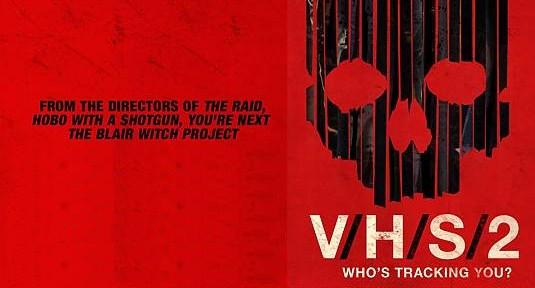 Just when I thought mainstream horror couldn’t get any more disturbing, more innovative, or shocking; that films like “The Conjuring” and “Cabin in the Woods” were the answer to modern horror’s lack of fresh, scary material, and just when I thought I had seen it all and could never ever possibly feel genuinely scared again, I watch V/H/S 2 and its four short films: Clinical Trials, A Ride in the Park, Safe Haven, and Slumber Party Alien Abduction.   V/H/S 2 completely blows the first installment (which I reviewed last year and consider my favorite watch of 2012) out of the water and manages to pack four completely new and frightening short films into the same anthology/wrap-around narrative format we saw in the first V/H/S.   The overarching story of the movie is about two investigators searching for a missing college student who stumble upon his weird collection of VHS tapes – the found-footage/POV camera style of all of the shorts are unnerving,  and while all of the four installments are incredibly solid and frightening, “Safe Haven”, the third and best phase of V/H/S 2, left my jaw nearly dragging on the floor and I’m finding it hard to shake off some of the visuals and adrenaline rush it produced even an hour after the credits rolled.

“Clinical Trials” is about a man who agrees to test out a bionic eye with ghostly side effects.

Double feature tonight! Battle of the seriously average movies! Watched The Resort and Safer at Home tonight. Both get a grade of a big ol C. Both under 90 minutes. The perfect casual viewing night. Safer at Home was at least fun since it was set during the pandemic, or rather a very near future in 2022 where 253 million people worldwide have died from various COVID mutations which kinda seems like where we are headed. The Resort was ehhhhhhhhhhh.
HORROR OLYMPICS, PART 6: Archery! Y’all know I had to get Three Finger in here. #horrorolympics #archery #wrongturn #horror
HORROR OLYMPICS PART 5: Fencing! #horrorolympics #urbanlegendfinalcut #fencing #horror #suckysequels
HORROR OLYMPICS PART 4: Track and Field! #horrorolympics #graduationday #troma #polevault #horror #summerolympics