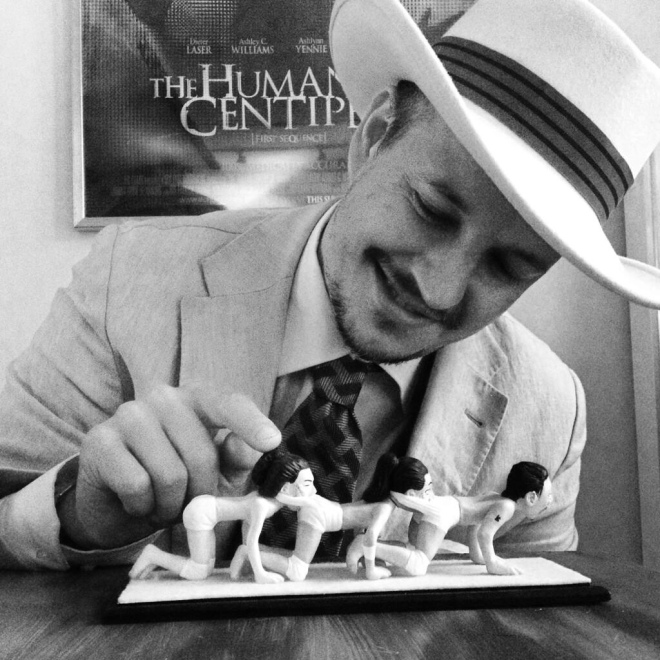 Martin Lomax, played brilliantly by Laurence R. Harvey, makes Billy Loomis look like a casual movie fan. To say that Martin is a fan of the Human Centipede is the understatement of the century. It turns him on. He masturbates while watching it. He is pathologically obsessed with the film. So obsessed that he makes it his life’s mission to recreate the entire movie – and multiply the human centipede by four.

Poor Martin lives at home with his ghastly, suicidal mom and his pet centipede. Martin struggles with asthma and the emotional scarring from the hands of his sexually abusive dad and equally perverted therapist, Dr. Sebring. He works in a parking garage. (Pro-tip: If you sense that there is anything else happening in a parking garage other than parking cars, you need to get the F out of there.) Martin finds solace from his dysfunctional reality by clubbing people with a crowbar and tying them up in his warehouse from hell. His goal? Yep, you guessed it. Re-create the human centipede. Except, for real this time, not just in a movie (but still in a movie….HORROR INCEPTION!!!!) Martin somehow even lures one of the actresses from the original Human Centipede movie to come to London under the impression that she’s auditioning for a new Quentin Tarantino movie. Turns out she’s auditioning to be the lead human in the human centipede. And let’s be honest with ourselves, if we’re going to be anyone in the human centipede, we want to be the first human. 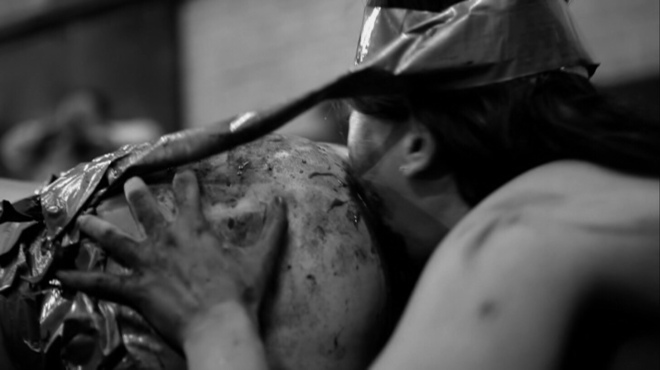 When Martin collects all of his victims, he begins his procedure. The key differences between Martin and Dr. Josef Heiter, the lunatic doctor from The Human Centipede, are:

Martin is a CREEPY looking dude. He’s more deranged and brutal to his victims than the dear old doctor. He is sexually aroused by what he’s doing. He giggles throughout his monstrosities. He is a David Berkowitz level psychopath.

The Human Centipede 2 is certainly nothing more than a depraved, shocking movie that glorifies human suffering. It is watching a horrible car wreck in movie form. It’s not A Serbian Film level awful, but it touches the line of “why the hell am I watching this shit?” (Literally.) The black and white imagery of the film adds to the awfulness of what’s happening. Martin’s warehouse looks scarier. His eyes look emptier. The scenes stay with us longer. Director Tom Six accomplishes a lot without using any color.

Worst part of this movie? Literally EVERYTHING that happens.

Question I’m still wondering: What the heck happened to the pregnant woman? Though we do know what happened to her baby.

Six has completed the third and final installment of the Human Centipede which is set to release sometime in 2014. He says that the final sequence will not be anywhere near as gross as the first two movies, but definitely the most controversial. The reported tagline is “100% politically incorrect.” Laurence Harvey returns as a different character, and so does Dieter Laser who played Dr. Josef Heiter in the first movie (also a different character.) Six will also star in the movie along with Eric Roberts. The third movie is set in a US prison somewhere in the desert. Beyond that, we don’t know much. I do know that I will be eagerly awaiting its release!