In 2018 horror fans buzzed about a certain pool scene from an otherwise critically panned sequel. I personally loved The Strangers: Prey at Night but many people were underwhelmed. However, everyone seemed to agree that the pool scene was instantly legendary. And I agree.

That pool scene started and ended strongly. It quickly broke a slasher rule and then somehow got even better. The juxtaposition of flashing neon lights, Bonnie Tyler, and the sound of the Man in the Mask’s axe scraping against the concrete is *chef’s kiss*. Director Johannes Roberts had recently finished filming 47 Meters Down and learned a LOT about underwater filming in the process of making that movie. His mastery of this technique is obvious as the camera seamlessly moves above and below water in the now iconic pool scene. I could watch that scene over and over again and cheer the same way I did in the theater when I first saw it.

Which got me thinking…

What are other exceptional scenes in the last 20 years of horror that are in movies that weren’t overall loved by audiences and critics? The scene itself is memorable, but the movie itself didn’t blow fans away.

Top of mind for me is the Madame Bathory scene in Hostel II. This is another case where I love the movie, but horror fans in general don’t seem to agree. That scene is freaking awesome, though. What I enjoyed about Hostel II is what I wanted from the first one – more information about the members of the Elite Hunting Club. I was awestruck by the idea of a mega rich woman paying to bathe in the blood of an American tourist. The scene is visually arresting and dirty. It feels perverted, like I’m not supposed to be watching it.

I would put 30 Days of Night in this category as well. Once again, it’s a movie I really enjoy but I have several horror-nerd friends who hate it. They agree that the scene of pure vampire carnage in the town of Barrow, Alaska is top notch. This is the point in the film where literal hell breaks loose and the vampires go ape shit on the town and its residents. Windows are shattered, wives are eaten, and guns aren’t doing a damn thing. There’s a really awesome aerial view of the massacre that nicely highlights the blood spatters on the white snow.

Who can forget the opening scene of Ghost Ship? Unless you truly love that movie, do you remember ANYTHING else that happens? Probably not. But you remember that wire severing an entire cruise line of passengers in half. Epic opening. Great scene. The best part is when the little girl looks up at her dance partner and his head falls off. (Hi, welcome to my horror blog where we celebrate decapitations!)

There are a few others floating around in my brain, but I’m undecided if the movies were actually deemed a stinker by fans or if they are well liked. I think in general people really love the Final Destination series. But is part two really beloved or do people just remember and rave about the log truck scene? Similarly, does any general fan of horror actually remember the plot of Jeepers Creepers 2 or do you just love that it took place on a school bus? Finally, I’m wondering about V/H/S 2. Was the whole film well received or did people just really fucking love the “Safe Haven” segment (as they should, because it’s bat shit crazy bananas awesome). 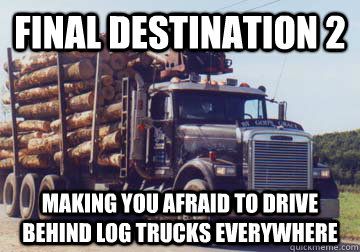 What other iconic scenes can you think of from the last 20 years, but the movie itself wasn’t really well received?