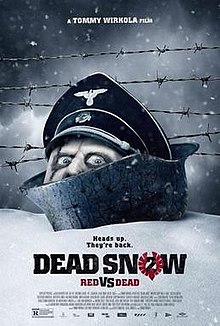 In 2009 I obsessed over Dead Snow – a campy Norwegian splatter-comedy about a group of friends on a ski trip who are terrorized when they accidentally summon an army of Nazi zombies. And fortunately for me, the sequel is fantastic and somehow even nuttier than the first one. This time, Colonel Herzog and his battallion of German undead face-off against sole survivor Martin, a trio of geeky, wannabe zombie hunters, and, naturally, the platoon of Russian P.O.W. zombies they control.